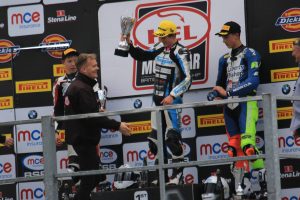 Max Cook made it five wins from five races. Charlie Atkins secured sixth and his best result of the season. Tom Alexander picked up four more championship points continuing his record of scoring in every round.

Barnsley’s Moto3 team Wilson Racing completed a successful round at Oulton Park in the Hel Performance Motostar British standard class Championship. The 2.8 mile circuit in Cheshire is a firm favourite on the British Superbike calendar.

On the Saturday the riders enjoyed two free practice session in good conditions. In the first of them Max Cook was the only rider to break the 1:50 minute barrier. His 1:49.929 placed him at the top of the timesheet. In the second free practice a broken foot peg hampered Cook’s chances of further improvement. Charlie Atkins made a solid start in FP1, before going on to further improve in FP2 with a lap time of 1:52.859. That placed him 8th on the day. In FP2 Tom Alexander was able to slash five seconds off his FP1 time as he continues his apprenticeship in this class. His 1:58.068 put him 14th.

The Oulton Park event only has one race which meant on the Sunday the riders had a third free practice session before qualifying in the afternoon.  Cook had a huge crash at Cascades during FP3. This left the team with just a few hours to repair the damage before qualifying. Charlie Atkins continued to chip away at his lap time and moved up to 6th overall. Tom Alexander was unable to beat his previous lap time during FP3 but gained confidence aboard his NSF Honda. 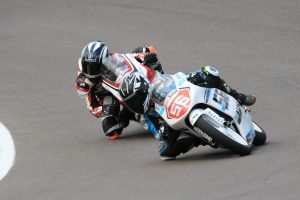 A couple of hours later and qualifying was upon the riders. The team had done an amazing job in getting Cook’s bike back together. He went and set the second fastest time in qualifying missing out on pole by a tenth of a second. Atkins set his best lap time of the weekend, a 1:51.488 which meant he qualified 8th for the race on Monday. Alexander concentrated on getting more laps under his belt and qualified 14th in the standard category.

There was immediate drama as the race got underway on Monday. A rider in the GP class had a problem on the grid and as the lights went out two riders crashed into him, with one suffering a broken leg.

The restarted race saw 14-year-old Max Cook hit the front and slowly make a gap at the front of the race. He continued to control the race going on to win it by five seconds.

14-year-old Charlie Atkins made a great start moving up from 8th to fifth in the opening lap. Although he dropped to sixth he was then involved in an exciting battle with another rider throughout the race. Atkins finally got the better of him to cross the line sixth and pick up ten points. 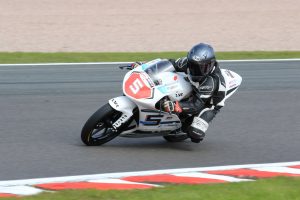 Tom Alexander worked hard again all weekend. The 13-year-old started 14th in his class and set his fastest lap of the weekend during the race. He came home 12th and was rewarded with four points.

Gary Wilson said,” Firstly, we hope that Elliot Pinson makes a quick recovery from his leg injury and is back in the paddock soon. I’m delighted that Max now leads the championship by 38 points after three rounds. Charlie Atkins got his best result of the year so far and Tom Alexander continues to improve. Another great weekend for Wilson Racing! It’s a shame the next round at Knockhill isn’t until the weekend of 16-18 June.”