There were two superb podiums for Barnsley based Wilson Racing’s Scott Ogden moved him to fourth in the championship. The team was competing in the penultimate round of the British Motostar Moto3 championship at Oulton Park.

Also riding for Wilson Racing were Charlie Atkins who came away with two top ten finishes, whilst Jack Hart and Jake Clark were also in the points. 13-year-old rookie Osian Jones suffered a fall in race one but came back finish 21st in race two.

After two wet free practice sessions, qualifying was dry although damp at the beginning of the session.  Ogden put in three superb laps at the end of the session the final one a 1:50.838 to finish second in the standard class just 0.243 off pole position. Charlie Atkins clocked a 1:53.060 which put him 9th on the grid. Hart was uncomfortable in the tricky conditions but gained confidence which each lap. He qualified fourteenth. Osian Jones qualified 21st reducing his lap times significantly throughout the session as he too became more confident. Jake Clark, unfortunately, was caught out by the slippery track early in the session and didn’t register a lap time.

The 12 lap race was red flagged on the first lap because rain began to fall. After a short break and on wet tyres a reduced 10 lap race got underway.

Scott Ogden put in a fine performance as he collected his fourth podium of the season. He was unlucky not to take the win missing out by just 0.027 seconds to Scott Swann. 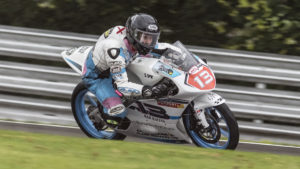 Charlie Atkins initially struggled for confidence in the wet but managed to come home ninth leading a group of three riders and set the sixth best lap time meaning a better grid position for the second race.

Jack Hart finished 14th in the first race in the difficult conditions. He started 13th for the second race.

With little track time and starting from the back, it was always going to be a tough race for Jake Clark. Lining up 22nd in the standard class he crossed the line 18th at the flag.

The 13-year-old Osian Jones was caught out in the wet conditions and crashed out of the race. Thankfully the 13-year-old was unhurt.

Scott Ogden was again at the sharp end of things as he and Scott Swann were able to break away once more from the field. Ogden managed to lead the race at one point but ultimately he had to settle for second, this time by 0.442 seconds. 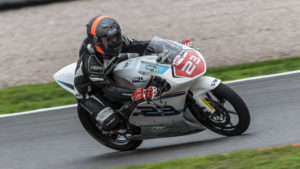 Charlie Atkins enjoyed the dry line that was developing on the circuit in race two. He spent the 10 laps racing the newly crowned Champion in a four-way battle for fourth place. Atkins crossed the line in sixth just four-tenths behind the title holder.

After a difficult race on Saturday Jake Clark returned to the points scoring positions as he came home in fifteenth place.

Jack Hart crossed the finish line outside the points in race two. He was 17th after a tough race.

Osian Jones bravely remounted his motorcycle to take part in race two. Having missed out on valuable track time on Saturday and with free practice almost a washout Jones gained in confidence setting his fastest lap time on the last lap.

Gary Wilson said,” Scott was brilliant with two more podiums. That’s three podiums in the last three races. Charlie Atkins was great in race two and is now eighth overall. Jack Hart and Jake Clark both scored points which was also pleasing. Osian Jones didn’t score any points but his development is solid.”