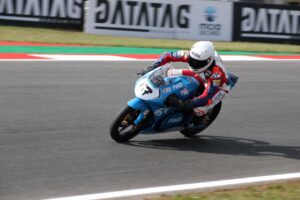 Friday had seen to very wind-blown free practice sessions. It was proving tough for the young riders on such light-weight machines both all three did well. Saturday morning the weather was bright but the wind was still strong for qualifying.

James Cook was rewarded with a 12th place spot on the grid for race one after clocking a 2:08.939 lap time on his Honda Moto3. Ryan Hitchcock would line up 14th and Josh Hiatt 23rd.

All three riders made bright starts to the first British Talent Cup race of the weekend. Cook moved up to 11th, Hitchcock to 13th and Hiatt made up four places as he looked to recover after his difficult qualifying session.

By lap two James Cook had made it into the top ten and was continuing to push on.  He went on to close down Stuart-Campbell and Corey Tinker. Cook continued his progress reaching seventh place in what was a superb race.

Unfortunately, the 13-year-old’s hard work began to unravel with just five laps of the fourteen remaining. The Honda developed an electrical issue that meant James lost power down the straights. He plummeted down the order but was determined to make the flag. He crossed the line in P22.

Meanwhile, Josh Hiatt had continued to pick up places and was battling hard with Gary Scott and Sullivan Mounsey. He eventually managed to get the better of both of them and finished fourteenth for his first two championship points of 2020 and a great recovery after starting down in 23rd.

The team worked late on into the night to try and find the electrical problem that had struck James Cook’s machine in race one and appeared to solve the problem. However, the youngster didn’t get the start he wanted and was bustled out in the early corners dropping from 8th to 16th by the end of the first lap. Cook quickly recovered and went on to finish race two in 11th position.

Ryan Hitchcock put in a sterling performance. He made light work of the riders ahead on the first lap moving from 14th to 11th. He then continued his progress and unlike his solitary race yesterday he spent 14 laps battling with fellow youngsters Tinker, Belford, and Crosby in a four-way battle for top ten positions. In a thrilling race Tinker and Hitchcock changed places regularly before Hitchcock went on to cross the line in ninth position. 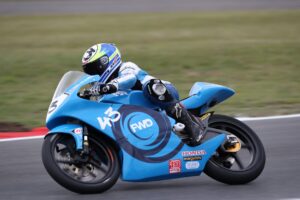 Josh Hiatt was looking to add to the points he grabbed yesterday. He started 17th for race two and maintained position in the early laps. He moved up to 15th at one stage and looked set to score. However, on lap ten Hiatt lost time and fell back a couple of places eventually crossing the line 17th.

Gary Wilson said, “Ryan [Hitchcock] has had another good weekend. Two top ten finishes and a great battle with other riders, which is valuable experience. James [Cook] rode really well in race one but he suffered an unfortunate electrical issue that compromised his race. In the second race he had a difficult start but I was really pleased to see how hard he fought back to eventually finish 11th. It was also great to see Josh [Hiatt] get his first points of the year.”

The next round of the Honda British Talent Cup is on the weekend of 4th to 6th September at the Silverstone National circuit.