Wilson Racing came away from Snetterton with three points-scoring finishes. Cook bounced back from the two DNFs at Silverstone with a sixth and fifth position finishes. Luca Hopkins ended his first race in the pits after a racing incident but returned to the points finishing 14th in race two. 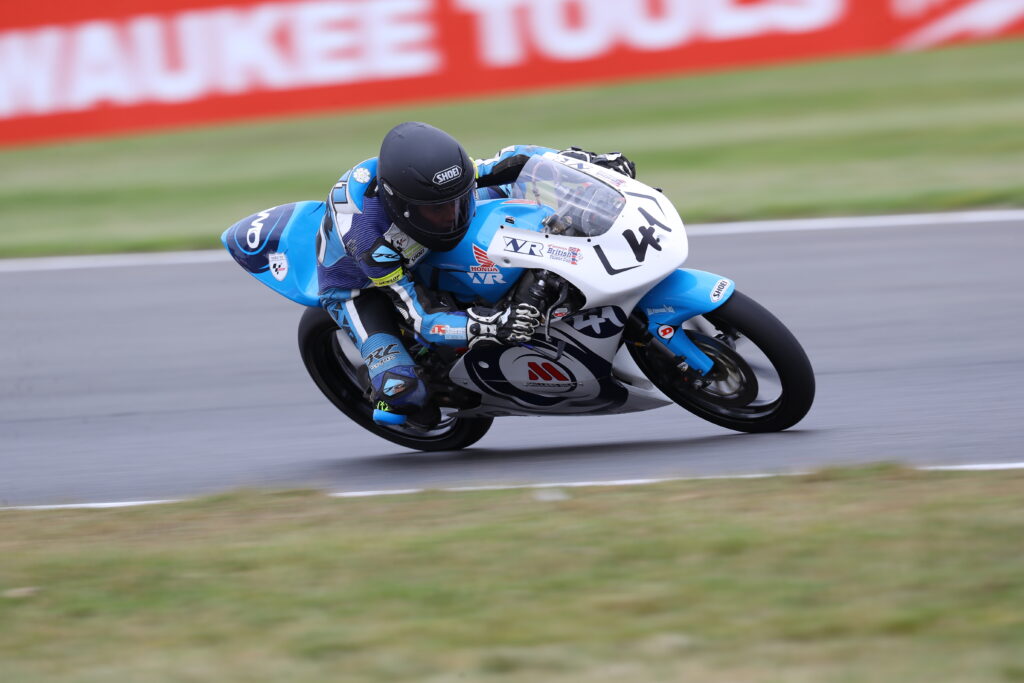 Team owner, Gary Wilson, spent most of the week between Silverstone and Snetterton rebuilding James Cook’s bike that took serious damage after he was knocked off by another rider in the last round. In fact, the team were still at work on the Moto3 machine on Thursday evening.

When Friday free practice one got underway Cook managed 14th in FP1 and improved to finish 10th in FP2 as he regained some of his confidence with his Honda NSF 250.

Luca Hopkins was looking forward to his weekend at Snetterton. It was the first time the rookie had raced at a track he had ridden before, as the British Talent Cup riders had tested here before the season started. He chipped away at his lap time through the two sessions. Having finished 21st in the FP1 he made significant gains in FP2 to end the day 19th in the combined times. 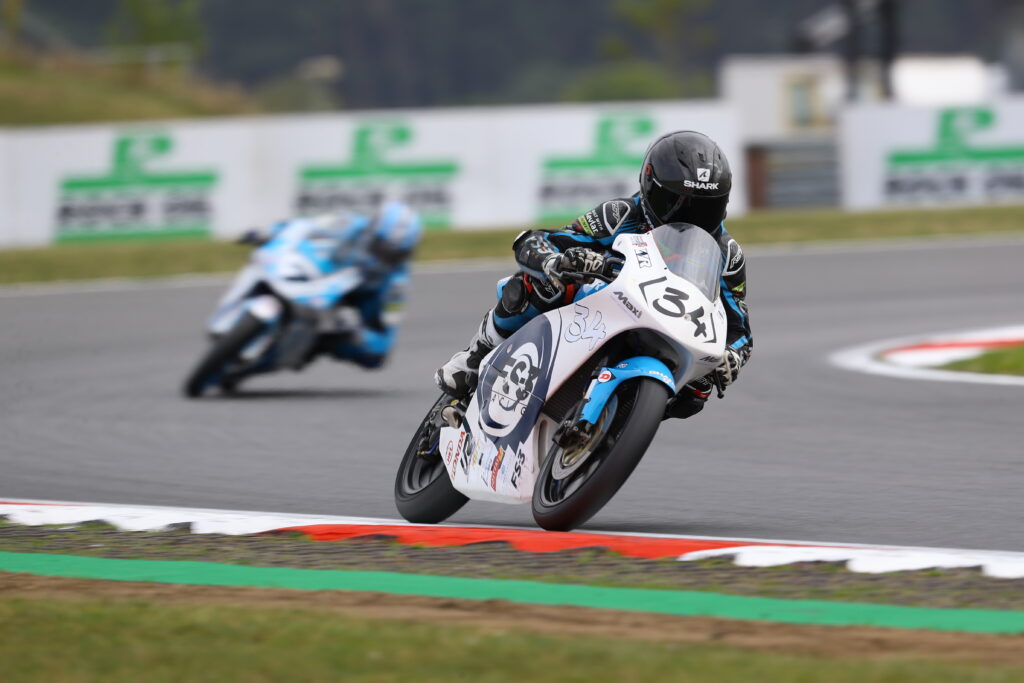 The British Talent Cup riders were up early on Saturday morning to start their 30-minute qualifying session. Cook was sitting 11th five minutes in with Hopkins just outside the top 20.

During the final few laps, both riders went on to improve. Hopkins ended the session with a time of 2:07.319 putting him 14th on the grid. Cook managed to improve on his final lap qualifying seventh and headed row three with 2.06.455. 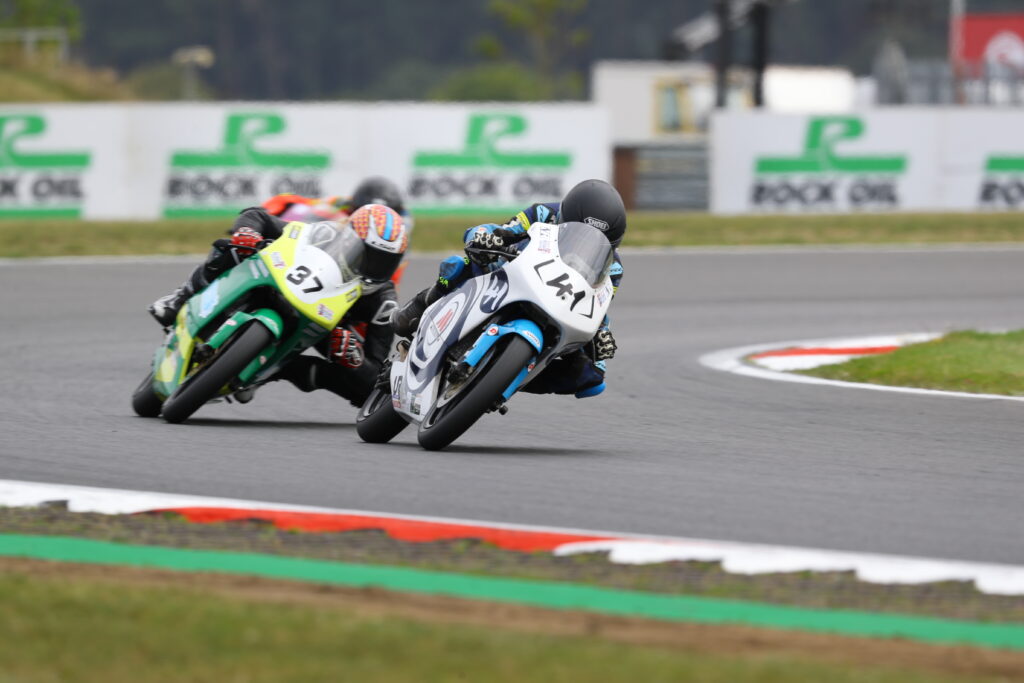 Both Wilson Racing riders made a cautious start to the race. Cook entered Riches in tenth position whilst Hopkins fell back to 17th. Lap two saw both riders begin to make progress as each gained a position.

By lap three Cook was on the back wheel of British Talent Cup race winner Jamie Lyons and went on to overtake him a lap later. He was soon running sixth.

Hopkins was in 14th and part of the battle for 11th in this early part of the race before moving up to 12th behind the Dutch rider Viejer. He was in a real tussle with several riders. Having just set his fastest lap of the race he then made an overtaking move on lap 11 down the inside of another rider. Although alongside his competitor, his rival appeared not to see him and left no room. The two touched. Hopkins managed to hold on whilst the other rider fell. Unfortunately for Hopkins, he had to come into the pits shortly afterwards.

Meanwhile, Cook was running in a safe sixth place and went on to claim another ten championship points. It was a great comeback after the disappointment of two big crashes last time out, neither of which were his fault.

Hopkins would line up 15th for race two and Cook started eighth. As the race got underway Cook turned through Riches in seventh and briefly into 6th position on lap one. Hopkins held station in 15th on the opening lap.

Cook managed to stay in the leading group of seven riders throughout the 12 lap encounter. The number 34 battled with Crosby regularly and also with Carter Brown in the closing stages. On the penultimate lap, Cook was in fourth position as he made a move inside Carter Brown but the City Lifting rider regained the position later in the same lap. James Cook pushed hard until the end of the race setting his fastest time on the final lap as he finished the race in fifth position.

An early incident between three riders meant the chasing riders were split and Hopkins spent several laps riding on his own in 15th position. Later he was involved in a three-rider struggle with Rowan and Viejer. Like Cook, Hopkins pressed until the very end of the race as he also set his fastest lap time on his final lap to take 14th spot.

James Cook is 6th in the overall standing son 129 points. Hopkins moves on to 18 points and 21st overall. 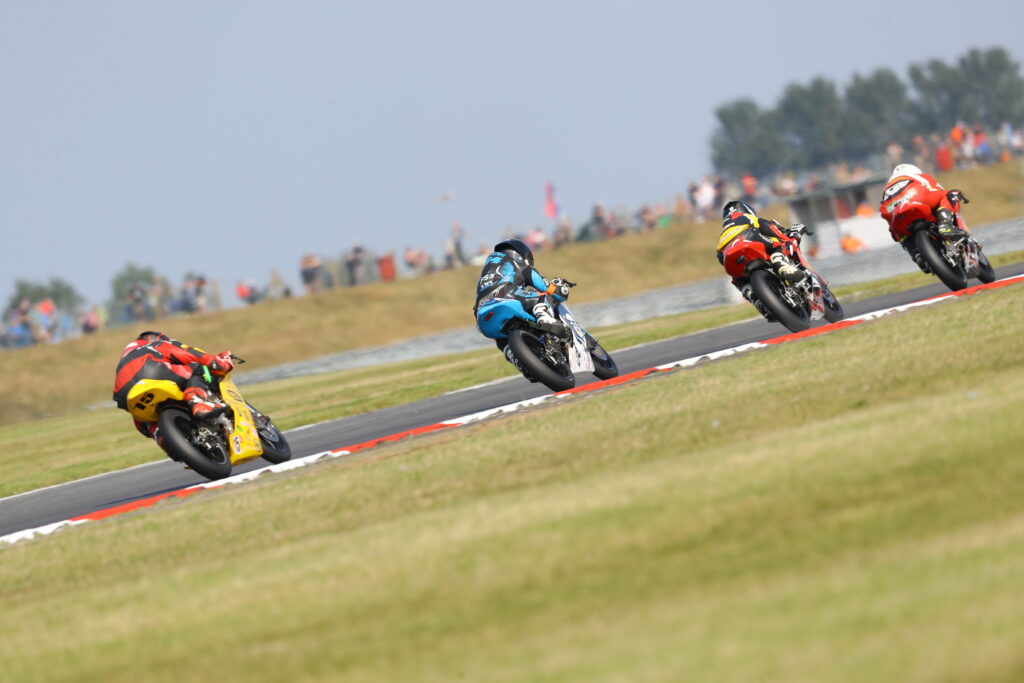 Gary Wilson said, “We have had to work really hard to get James’ bike back together this week after it was all but destroyed at Silverstone. So it was very pleasing to see how he grew in confidence over the weekend and ended up taking two solid results. Luca Hopkins also had a great weekend. He improved throughout. He was unlucky in the first race but went on to do well in race two and score more points.”

The next British Talent Cup event is at Silverstone on the National circuit this time from 10th to 12th September.