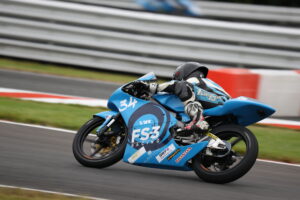 Wilson Racing had a successful start to the 2021 British Talent Cup championship with a fourth place in race one and all three riders scoring points at Oulton Park last weekend.

We have had to wait since mid-October 2020 for the new British Talent Cup season to begin but it proved very eventful for the Barnsley based team.

This season the three riders competing in the standard Moto3 category of the British Superbike Championship series are James Cook, Ryan Hitchcock and rookie Luca Hopkins.

The event got underway on Friday when around thirty riders competed in two free practice sessions in mixed conditions. In FP1 the riders faced a damp by drying track. James Cook showed his pre-season form when he set the third fastest time. Ryan Hitchcock was just a tenth outside the top ten in 13th position whilst Luca Hopkins spent the time learning the circuit for the first time finishing 24th.

The track conditions deteriorated for FP2. James Cook excelled as he posted the quickest lap time and Hopkins did well finishing 16th. Hitchcock struggled to find his confidence during this session but time well spent with the team afterwards would see him bounce back in FP3 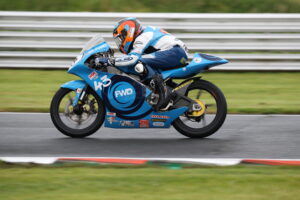 Saturday was a busy day for the British Talent Cup riders. They had their final free practice session, qualifying and then their first race of the weekend. In final free practice Cook was again in the top three, Hitchcock was 13th but just three-tenths from the top ten and Hopkins continued to improve ending the session 22nd.

The all-important qualifying session was next up. With around 30 riders on the track it is always an advantage to get a good grid position. James Cook posted a 1:49.511 which saw him qualify a superb third and on the front row. Hitchcock continued his improvement qualifying 12th for race one whilst Luca Hopkins lined up 25th on the grid.

As the lights went out on the opening 14-lap race of the British Talent Cup season James Cook lost a position, but quickly recovered it. By the end of the first lap he was already into second position and pushing hard.  Hitchcock was 12th and Hopkins had made a superb start making up four places and running 21st. Despite his best efforts to save it, lap two saw James Cook high-side out of Shell Oils and crash out of the race along with another rider. The race was immediately red-flagged with both riders and machines still on the track. Fortunately, both riders avoided serious injury. 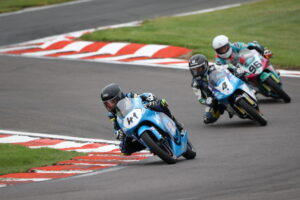 After a delay the race was restarted minus the two fallen riders and over a reduced distance of 10 laps. Hitchcock and Hopkins both made excellent starts to the re-started race. Hitchcock was quickly into 9th position whilst Hopkins had leapt to 14th by the end of lap two and was leading a group of five riders.

At half-distance Hitchcock was closing in on the group battling for fifth position. In the final few laps he picked off three riders moving from eighth to fifth before overtaking one more on the final corner of the race to cross the line in a superb fourth position.

Rookie Luca Hopkins went on to finish fifteenth at the chequered flag and score his first point in his first British Talent Cup race.

After his superb race one on Saturday Hitchcock started Sunday’s race from fourth on the grid. Luca Hopkins line up 19th and James Cook has to start all the way back in 28th position.

Hitchcock made a solid start and soon settled into the group battling for 5th place with two other riders. Hopkins quickly made up a couple of places and Cook began to storm through the field gaining 8 positions on the first lap. 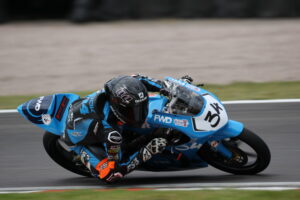 As the race went on, and with just a few tenths of a second separating them, Hitchcock was in 8th but with a possibility of fighting for a fifth place finish. Unfortunately, a small mistake going into Hizzy’s chicane on lap eleven brought the youngster down and out of the race.

The incident led to the race being red-flagged but thankfully Hitchcock was able to walk away from the trackside.

The race had run a sufficient distance for the positions to be declared a result. Hopkins had got himself up to 14th position at this stage as he claimed another well-deserved two points to add to the one he collected in race one.

Cook’s fantastic progress had continued in what was a very classy ride and he was rewarded with an 11th place finish having started at the back of the field.

Gary Wilson said, “That was an eventful weekend but really pleased with all three riders. Ryan had a great first race and until his off in race two was in the mix again for a top five finish. James Cook showed great character to come back after his crash on Saturday and jump straight back on the bike and ride from 28th to 11th in Sunday’s race. And Luca Hopkins has completed his first two ever Moto3 races and scored points in both of them. I am really proud of all three of them.” 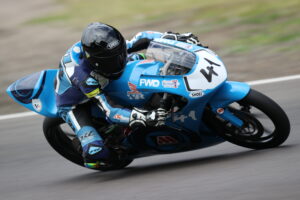 The second round of the British Talent Cup will be at Knockhill on the 10th to 11th July 2021.