The spectator at the 2.4-mile Thruxton circuit basked in the sun this week, as they watched two superb Moto3 races.

The team faced some challenges over the weekend, the first of which occurred early on when Jack Hart had a big crash in free practice. The 14-year-old fell at one of the fastest parts of the circuit in free practice one. The team did well to get the bike back together before the afternoon session and luckily, Jack Hart was not seriously hurt. 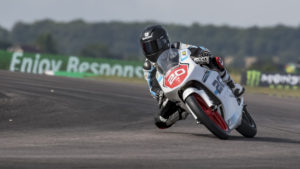 Ogden got a fantastic start to race one and quickly moved up to second place in the first few corners. Unfortunately, he suffered a technical issue on the first lap so had to retire from the race. Charlie Atkins made up three places over the twelve laps and crossed the finish line to claim another great top-five finish.

Jack Hart was racing for the first time at the Thruxton circuit and after his off in free practice one, he had missed some valuable track time. Despite the setback, he dug deep and after battling with his teammate Jake Clark during the race, he went on to finish in a brilliant ninth place.

Jake Clark made a solid start from 13th and after battling with his teammate, he went on to cross the line in 12th.

Osian Jones also had not ridden the circuit before and the youngster from Wales put in a fine display to claim his first championship point of the year finishing 15th.

In race two Ogden had to start from 11th but quickly worked his way into the lead group. With the race leader having made a breakaway Ogden and Charlie Atkins were involved in a thrilling battle with the chasing group. Ogden narrowly missed a podium by a quarter of a second. Atkins crossed the line 6th in a group that saw riders two to seven cross the line less than half a second apart.

Jack Hart was unable to complete the second race as he tumbled out on the second lap. Jake Clark picked up another 12th place after enjoying a race-long battle with another rider. Osian Jones just missed out on picking up his second championship point when he finished the race in 16th place.

Gary said, “I was pleased to see Osian Jones get his first championship point and he is improving with every session. Scott Ogden was unlucky not to be on the podium in the second race; Charlie got another top-five finish and was close in race two. Jake Clark picked up two more points scoring finishes. The team worked really well after Jack’s accident and he did remarkably well to finish inside the top ten after that. Thanks to all the team and the riders and also Dijon Home and Flooring for their support of the team.”