Despite the poor weather conditions at the British Talent Cup event at Donington Park last weekend, the Moto3 rookies of James Cook and Ryan Hitchcock came through with some great results.

In the first race of the weekend Cook finished in a strong sixth position which he followed up with an eighth in race two on the Sunday. As Hitchcock gained confidence in the wet of race one he crossed the line in tenth. Sunday saw him improve further to cross the line in seventh.

Due to the inclement weather the usual qualifying session held on Saturday morning was cancelled. The race organisers took the best lap times from the two Friday free practice sessions to set up the grid for race one.

In the cloudy but dry morning free practice James Cook had registered the seventh fastest lap time whilst teammate Ryan Hitchcock was 11th. The forecast bad weather had already arrived by FP2 meaning the riders were unable to improve their times.

The schedule for Saturday had been completely revised as the officials looked to try and get as many races in as possible before the weather would make it too dangerous to compete.

The rain was already falling as the 12 lap race one got underway. Cook made a cautious start to the race slipping from 7th to 10th in the opening half of the lap before recovering to 9th as they started lap two. He quickly gained his confidence and began to push on. By the end of the third lap the teenager was in 7th place and looking to close in on the rider ahead. It wasn’t long before he moved into sixth place. He was around two seconds behind the riders in fourth and fifth ahead. The gap see-sawed over the remaining laps and although Cook did not catch the riders ahead he had given a great performance in very tricky conditions to cross the line sixth at the flag.

Ryan Hitchcock formed part of the nine rider second group early on but he was still feeling his way in the early laps. As the group splintered Hitchcock was closed down by a few riders. Youngsters are fast learners however, and as the race went on Hitchcock gained in confidence with his Honda NSF250R in the conditions and began to significantly reduce his lap times. The number 43 went on to take 10th place at the line. 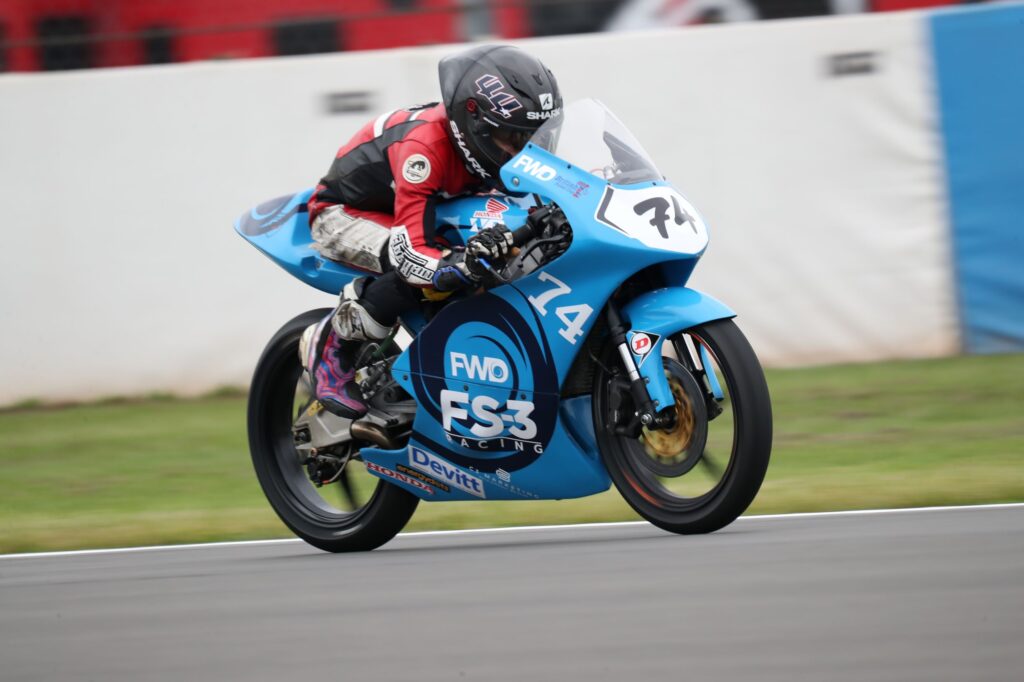 Cook started race two from 6th position and Hitchcock lined up at the end of row five.

The number 74 of Cook didn’t make the start he wanted and dropped 13 places down the running order by the end of the first lap. The determined youngster didn’t throw in the towel and quickly recovered four positions on lap two.

Another lap and two more places were recovered. By the end of lap five he was 12th and had caught a group of riders ahead.

Cook made short work of these riders and was into 8th spot with half the race to go. Once at the head of the group he pulled and gap which at the flag was almost four seconds. The final three laps of the race were Cook’s fastest. It was a great recovery.

Ryan Hitchcock, on the other hand made a superb start. He climbed 7 places riding round the outside of Redgate on lap one to find himself in 8th.

Whilst the leading group were already beginning to break away at the head of the race Hitchcock concentrated on his own race. Finding himself on his own he set some very consistent lap times and came across the finish line in a very respectable seventh place.

Gary Wilson said, “Both lads rode really well. The weather on Saturday was atrocious and for these young lads to ride as well as they did, on an unfamiliar circuit, was a great credit to them. This is their first year on a Moto3 bike and they are improving all the time. I should also thank our third rider Josh Hiatt. He is still suffering some neck issues so couldn’t ride but he came down to help out the team with the data.”

The final round of the Honda British Talent Cup is on the weekend of 16th to 18th October at Brands Hatch.