Barnsley’s Wilson Racing ended the British Talent Cup season at Donington Park this weekend with a 7th place finish and DNF for James Cook, a 16th and 13th for Luca Hopkins and for Ryan Hitchcock who had been out injured since Thruxton at the end of July a 22nd and 14th place finish. 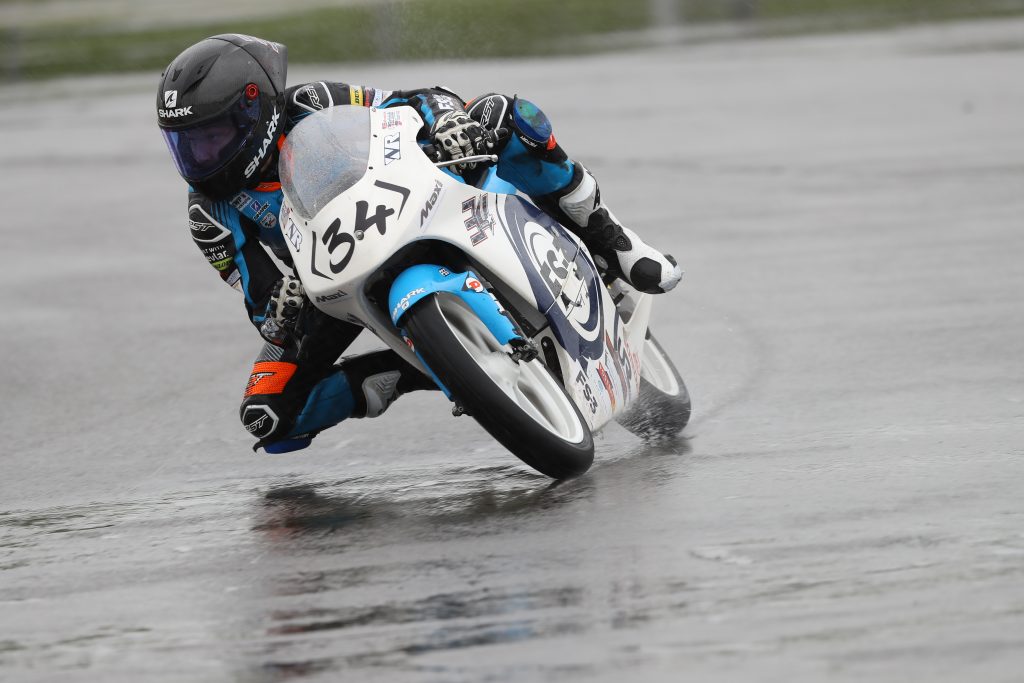 There was a wet start to the weekend at Donington Park. The first free practice session was a damp affair. Late on in the session rain began to fall. James Cook finished 21st quickest, Luca Hopkins was 23rd and Ryan Hitchcock 34th as the Wilson Racing team felt their way around the track. The second free practice session was dry and the youngsters were able to significantly improve their lap times and confidence. James Cook posted the fourth fastest lap time with Ryan Hitchcock finishing 21st. Luca Hopkins was 24th.

From Friday’s free practice the British Talent Cup riders started Saturday morning early with their qualifying session. Although the circuit was dry the track temperature was very cold.

The riders began to work on their pace but left it late to put in their flying laps and were caught out by a red flag that meant an early end to the session. The result was that James Cook qualified 18th, Ryan Hitchcock 19th and Luca Hopkins 22nd. 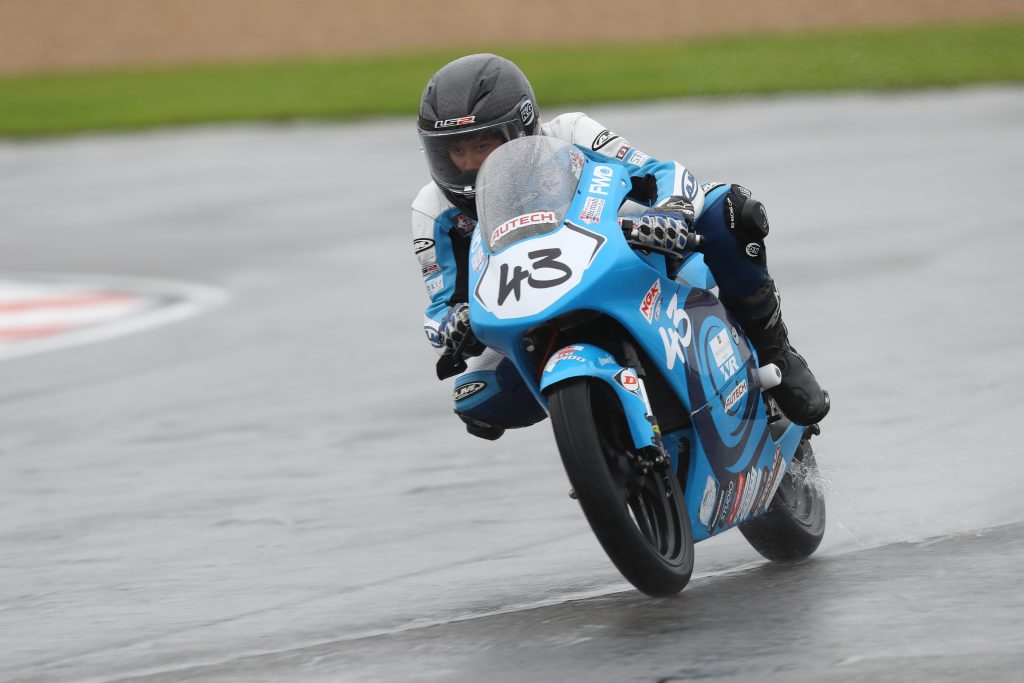 The track was cold and the rain fell throughout the 12 lap British Talent Cup race on Saturday. There was drama from the start as Luca Hopkins had to be wheeled off the start grid with problems getting the bike started. He would eventually start from pit lane.

James Cook was looking to make a good start as he was elevated to 18th on the gird after another rider had bike issues. His team mate Ryan Hitchcock was 19th on the grid. It was Hitchcock’s first race since Thruxton where he broke his left wrist so far from ideal conditions to make your comeback. His goal was to make it to the flag and gain confidence and experience on the bike again.

Cook made a really positive start in the tricky conditions as he gained four places on the opening lap. Hopkins joined the field at the very back and by the end of lap two had overtaken five riders. Ryan Hitchcock was circulating well and keeping safe.

Of the 34 riders that started 9 failed to finish which the conditions played a big part in. However, the three Wilson racing riders all completed the 12 laps. James Cook finished a superb seventh, Luca Hopkins fought his way to 16th from the back of the field, narrowly missing out on a point. Ryan Hitchcock came across the line 22nd setting his fastest lap on the final lap as he grew in confidence on his return to racing. 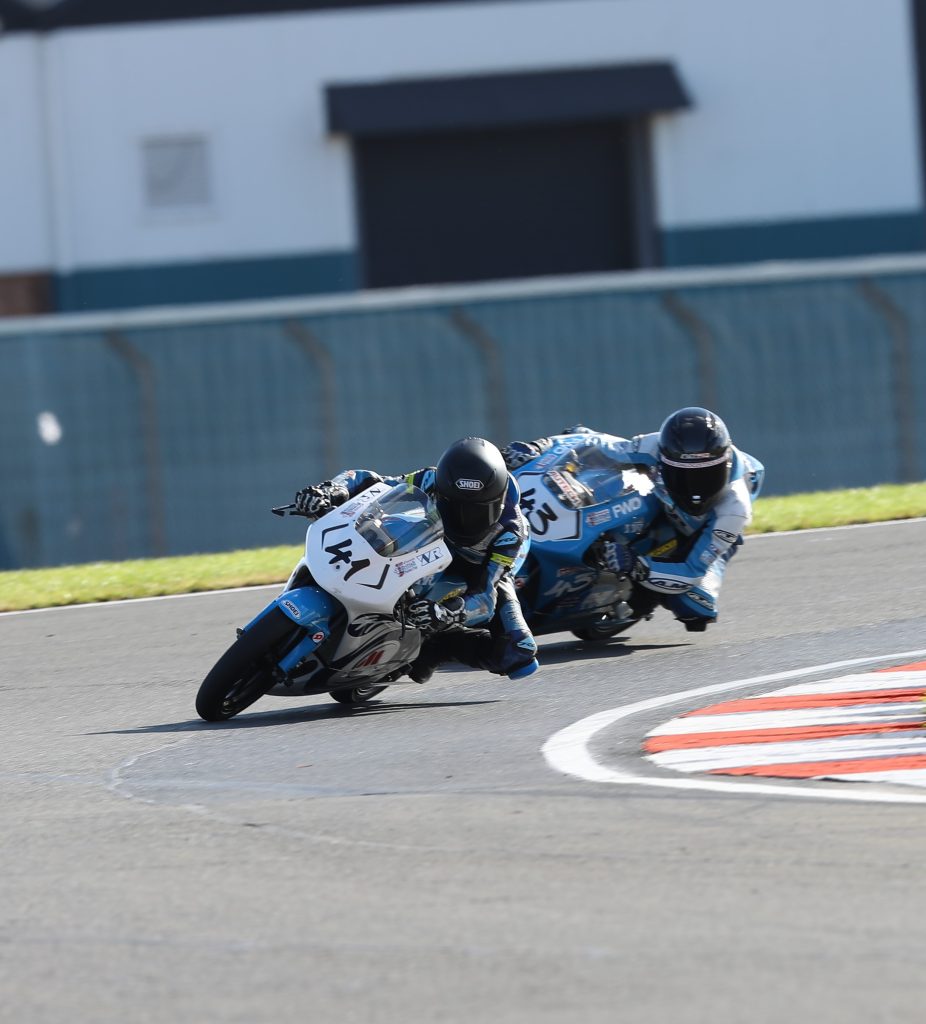 You could not have asked for much more of a contrast in conditions between the race on Sunday and that they riders had to endure on Saturday. A dry track and sunshine, although the temperatures remained cool.

James Cook lined up 8th on the grid with his teammates Luca Hopkins 20th and Ryan Hitchcock in 27th.

In the early couple of laps James Cook was running inside the top ten but on lap four he began to suffer a loss of power. He had a fractured exhaust pipe and had to pull into the pits to end his British Talent Cup season a little early.

By the time Cook was forced to retire to the pits Hopkins and Hitchcock had made good progress. On lap eight Hopkins was 12th and Hitchcock 18th in a battle for 14th to 19th places. Their track positions oscillated over the next few laps until the closing stages when both Wilson Racing riders were battling each other.

At the flag Hopkins edged out Hitchcock by just 0.284 seconds as they crossed the line in 13th and 14th positions.

Gary Wilson said, “It was great to see Ryan Hitchcock back after his injury in Thruxton. It has been a long wait for him and he did really well to face the wet conditions yesterday. Today it was clear his confidence was coming back and he ended the season well. Luca Hopkins has come on really well in his rookie season. We are all really pleased with his development. He should feel very proud of his efforts in 2021.”

“James Cook has made a major leap forward this season. He scored several podiums and was seen racing with the front runners on various occasions. I am really pleased with all three of our riders in another successful season.”

That is the end of the British Talent Cup season. James Cook ended the year on 144 points, 6th overall and with four podium finishes. Ryan Hitchcock was forced to sit out five rounds and finished 15th with 44 points. Luca Hopkins ended the year 21st on 24 points.