Barnsley based Wilson Racing British Talent Cup Moto3 team saw all three of its riders score points at round two at Knockhill. James Cook (13) just missed the podium by under half a second in race two finishing fourth. Hitchcock (13) came back from a crash in race one to take 9th in the second outing and rookie Hopkins (13) scored points in both encounters. 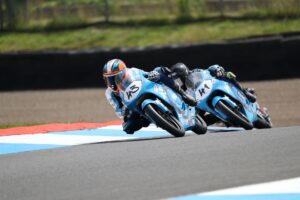 The short 1.3-mile circuit was missed off the calendar last year in the abridged pandemic affected season so it was a new track for all three riders.

On Saturday thirty British Talent Cup riders had two 30-minute free practice sessions. There was a red flag early in FP1 after one rider fell and his bike was stranded on the straight coming out of Clarke corner. James Cook was 16th at the time, Hitchcock 10th and Hopkins 19th. It didn’t take long for the race marshals to get the track clear and the session was underway again.

Luca Hopkins second free practice came to an unfortunately early halt. The number 41 rider tipped off on his third lap at turn 3. As riders are not allowed to remount his session was over. Shortly afterwards the second red-flag of the day came out as another rider tumbled at turn 9. It wasn’t going to be the last one either as the session was stopped again with 12 seconds remaining. In the interim Hitchcock put in a great performance as he found over a second to finish second overall with a time of 55.023. James Cook was 6th with a 55.405.

The British Talent Cup qualifying took place early on Sunday morning. Overnight rain had left the track wet buy drying. As conditions improved over the 25-minute session lap times naturally began to improve. Riders climbed the time sheet rapidly and then slid down again as other went faster on the drying surface. James Cook ended 9th, Hitchcock 12th and Hopkins 14th for the start of race one. 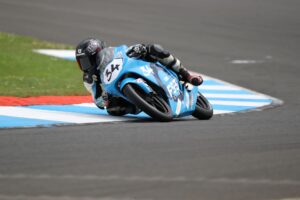 The first race was reduced to 20 laps after a delay caused by an accident on the warm-up lap. The track was almost dry with just one or two spots the riders needed to be wary of. Lights out and Cook made up one position on the opening lap to move into 8th place. Hopkins made a good start as he went through to 10th. Hitchcock unfortunately got caught out at the final hairpin as his high-side launched him off his moto3 machine. Fortunately, Hitchcock was up and able to walk away.

By lap two James Cook had progressed to 5th place and was pressing the riders ahead looking for further improvement in track position. The number 41 of Hopkins was running just outside the top ten.

On lap four Cook ran wide at the final hairpin and dropped down to 7th position. He quickly regrouped and was on the back wheel of Mounsey and Stuart-Campbell within a lap.

At the halfway stage Hopkins slid from 11th to 14th in his battle with a group of riders before Cook made his way back into 5th position on lap eleven. Hopkins continued his group battle moving through to 12th with six laps remaining. He went on to cross the finish line 13th, scoring more championship points. Having made an excellent recovery James Cook could not bridge the gap to the riders battling for the podium positions. He finished with a hard fought 5th. 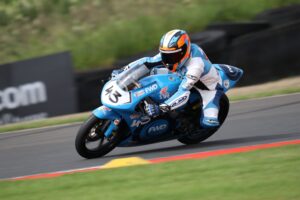 The grid positions were set by the fastest laps of race one. Cook lined up 5th, Hopkins 17th and Hitchcock had to start from 18th after his fall in race one.

Ryan Hitchcock gained 4 places on the first lap moving up to 14th position, whilst Cook moved into 4th place and Hopkins was running 14th.

By the end of lap four Hitchcock was into 11th spot. Hopkins continued to push and in a battle with two other riders was running in 12th position. Cook had lost a little bit of ground to the leading riders but in the second half of the race began to claw it back. With 8 laps of the 24 remaining Cook was less than half a second behind the riders battling for second, third and fourth.

Hitchcock had a lonely middle part of the race as he gapped the rider behind. In the closing stages he closed down on the rider in 8th but just ran out of laps to pass. He crossed the line in 9th at the flag. Hopkins did well in his three rider battle, ending the race sandwiched between them in 12th spot. Cook closed in on the riders battling for the last two podium spots but with back markers coming into play he had to settle for fourth place, just 0.427 seconds from third.

The results put James Cook eighth in the British Talent Cup on 29 points. Ryan Hitchcock is 12th on 20 points and Luca Hopkins 16th with ten points.

Gary Wilson said,” Another good weekend. All the boys did well as none of them have raced at Knockhill before. James Cook got close to his first podium. Ryan suffered a big high-side in race one but picked himself up and rode well in race two. Luca also had a small fall this weekend in free practice but went on to score points in both races.”

The next British Talent Cup event will be at Brands Hatch over the weekend of 25 to 27 July 2021.