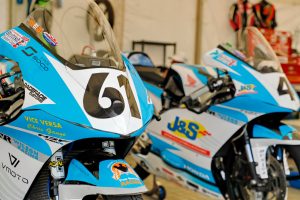 Race report Silverstone Moto GP round 6 of the British talent cup
It has been an incredible weekend for everyone at Moto GP for the 6th round of the British talent cup, full of highs and lows for the Wilson racing team.
It was a busy day Friday for the team as we had FP1, FP2 and qualifying all in the same day. The day started with FP1 and both riders getting a feel for the track again and getting a feel for the crowd that would be watching them on Sunday. FP1 finished with Harrison coming in 14th at 2.24.232 and Sullivan coming in 6th with a time of 2.23.251.
After waiting around for a few hours and prepping the bikes for FP2 it was finally time to complete FP2 back to back with qualifying straight after. FP2 went well with Harrison coming in 15th with a time of 2.23.433 and Sullivan coming in 8th with a time of 2.22.721. However Harrison had a moment in FP2 where he saved a highside causing him to come in a few minutes early from the session.
After FP2 it was back into the pits and the tanks off the bikes to refill them ready for qualifying, as well as the wheels changed ready to go back out. With qualifying complete Harrison was ready to line up 18th on the grid for race one and Sullivan in 6th.
Saturday was race one at 16:30 hours with the bikes being bought down pit lane about half an hour before for wheel changes and tyre warmers. It was then time to race, both riders had a great start to the race, Sullivan was battling in the 1st group for a place on the podium as Stephenson and Garness had pulled away, but towards the end of the race was in the second group as the pack had broken into two. Harrison was fighting further back to gain some points in the race crossing the line in 17th and Sullivan finishing in 8th.
After a late night from the team looking at data and working with rider feedback the team was able to work out settings to suit both riders. Straight into race 2 with no warm up Harrison starting from 20th and Sullivan from 10th the race began. With Sullivan fighting for a podium finish he unfortunately crashed out of the race a few laps in whilst in 4th. However Harrison was having an amazing race starting from 20th and now fighting for a top 10 finish, he managed to hold his own right up until the final turn when he lost a few spaces to a small error meaning he finished 13th.
Overall the team has had a great weekend gaining vital experience in the Moto GP paddock as well as meeting some Moto GP stars. After this brilliant weekend we will be back out racing at Thruxton in a few days time. 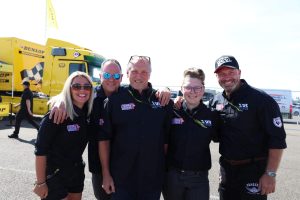 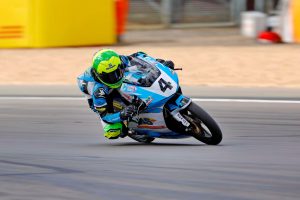 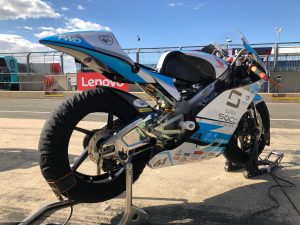 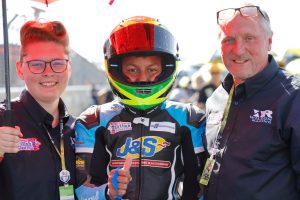