The British weather had a profound effect on the British Talent Cup event and Barnsley’s Wilson Racing at Thruxton this weekend. James Cook recovered well from a difficult start to finish race one in a commendable fifth position. Rookie teammate Luca Hopkins crossed the finish line in 14th whilst Ryan Hitchcock was unable to compete after crashing in free practice when strong winds caused him to fall and break his left wrist. Race two was cancelled after heavy rainfall.

James Cook now has 76 points and is 4th overall in the British Talent Cup. Ryan Hitchcock is 10th on 44 points and Luca Hopkins is 19th with 13. 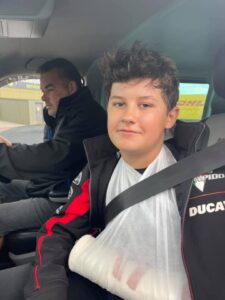 Free practice proved to be a challenging time for the Wilson racing team. With strong winds and mixed weather on Friday, two of the three-team members suffered crashes on the opening day.

James Cook was 2nd quickest in the opening free practice session with Ryan Hitchcock 11th and Luca Hopkins 27th as the three familiarised themselves with the fast-flowing circuit.

In the second free practice session, Ryan Hitchcock was performing well. He topped the timesheet late on in the session. However, the wind got under the bike at Church, a fast part of the circuit, causing the number 43 to crash out. The incident left him with a broken left wrist and unfortunately ended his weekend early.

Hopkins had crashed early in the session, having completed just a few laps. The number 41 saw his back wheel slide round on him at Goodwood. He thought he had recovered it but heading onto the damp grass he slid off, rider uninjured.

James Cook finished the day as the sixth quickest rider leaving him feeling positive for qualifying on Saturday morning.

The British Talent Cup riders had a thirty-minute session on Saturday morning to establish the grid positions for race one later the same day.

A cloudy but dry track saw Cook into the top five with ten minutes gone. He kept pushing moving into the top three with a 1:25.176. His teammate Hopkins was running 24th.

With just under quarter of an hour left Cook had called into the pits. On his return to the track he put in another twelve laps and although he came close he couldn’t improve on his earlier time and finished the session in a very respectable 6th place.

Luca Hopkins chose to stay out for the whole session and put in his fastest two laps at the end, setting a 1:28.711 which saw him line up 24th for the first race.

Cook struggled off the line and dropped down towards 9th position in the opening laps, whilst Hopkins quickly gained a position to move into 23rd.

The front group of Moto3 machines soon had made a gap at the front. Cook was in the battle for seventh to 15th. Positions change often throughout the 14 laps as is so often the case in this class. In the closing stages, a couple of rivals came together leaving just Cook and Belford to battle for 6th position. Cook won that battle and with the fall of another rider in the leading group, Cook secured a hard-fought fifth at the flag.

Hopkins meanwhile was steadily picking off riders, lap after lap. By lap nine he was 16th and leading a train of around five riders. He went on to secure 14th at the flag, gaining ten positions on his start position and importantly he picked up 2 more championship points.

Gary Wilson said,” This was the first time any of our riders have ridden at Thruxton which is the fastest race circuit they will compete on in The British Talent Cup. Unfortunately, the weather was not ideal to get to grips with a circuit like this but the lads showed great determination. Disappointingly for Ryan he suffered a broken left wrist and will have to miss Donington park which he is not happy about. Once again James Cook showed his pace and grit to fight back after a difficult start to the race. Luca Hopkins also had a great weekend as he went about working his way through the field lap after lap scoring more points.” 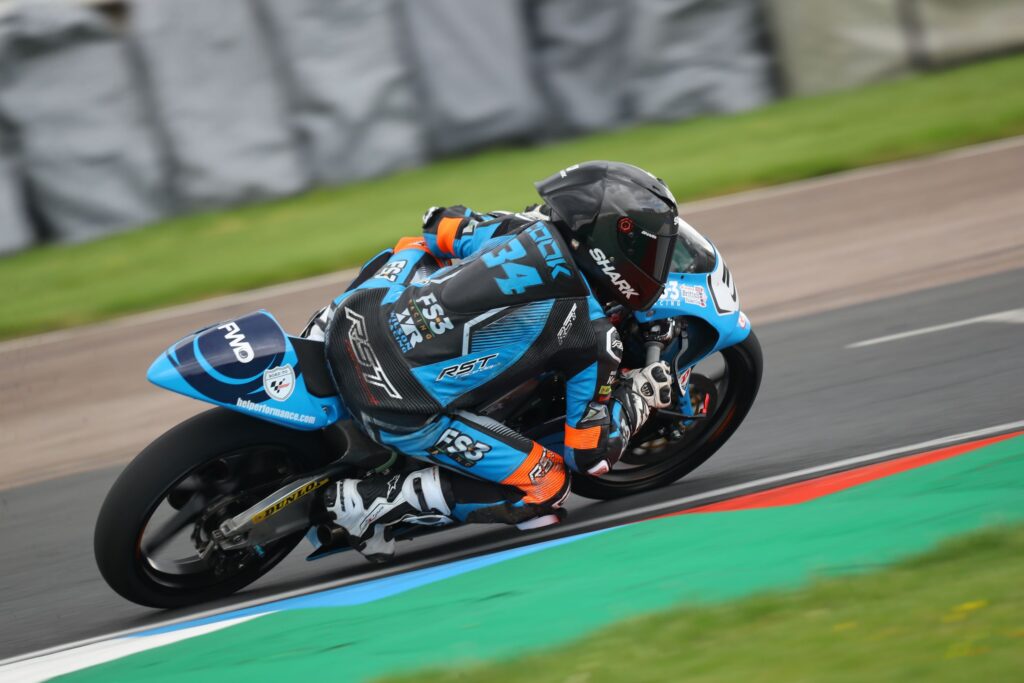 The next British Talent Cup event will be on the weekend of 13 to 15 August at Donington Park.