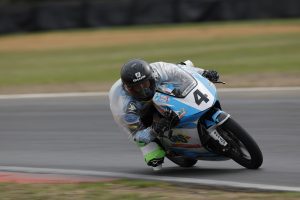 What a strange weekend it has been for everyone in the BSB paddock this weekend. Delays, Her Majesty’s passing, all kinds of weather and horses loose on the track! Thursday night we received the news of the passing of Queen Elizabeth ll, with this news we waited to hear if the racing would go ahead this weekend and by Friday morning it was a definite go for the weekend with a few changes to our schedule. 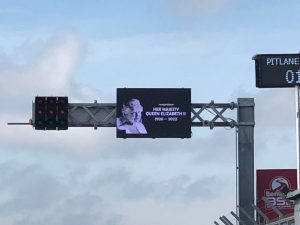 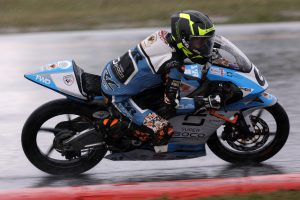 Saturday morning and the weather still hadn’t improved much in time for qualifying with the track still being damp and the sky overcast, the boys went out on their wets to show what they had got. Unfortunately it wasn’t meant to be as both riders crashed out after 1 lap with Harrison crashing out at Turn 9 and Sullivan crashing out at turn 12. It was then decided by race control that even though they hadn’t qualified they would be allowed to race from the back row of the grid that afternoon. So with the decision being made that they would be allowed to race the bikes we’re back race ready for that afternoon for race 1. Race 1 and Harrison lined up on the grid in 32nd and Sullivan in 31st. Both riders had great battles with Harrison getting an amazing start and managing to gain 7 places before turn 1. By the end of the race Harrison crossed the line in 14th with a best time of 2.06.472 and Sullivan came over in 15th with a time of 2.06.142. 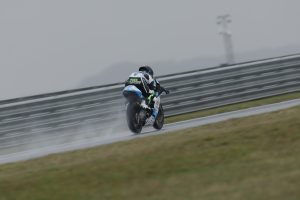 Sunday morning and the warm up was delayed by 1 hour due to very low lying fog, however when both riders got out they proved themselves with Harrison coming in 9th at 2.08.554 and Sullivan coming in 2nd at 2.06.093. Finally it was time for race 2 and lining up on the grid Sullivan started in 11th and Harrison started in 15th. Lights out and the riders set off. Unfortunately for Sullivan he was caught up in a race incident at turn 2 on the first lap bringing an end to his race. Harrison managed to get another amazing start and had a hard fought battle crossing the line in 6th with a time of 2.04.861.
Overall Wilson Racing have had another great weekend racing and would like to send our thoughts to the royal family at this hard time, and hope that Queen Elizabeth may rest in peace. 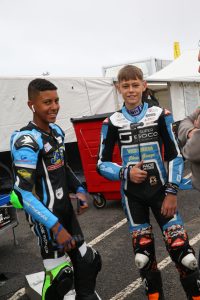