The British Talent Cup Moto3 season concluded at Brands Hatch last weekend with all three team riders back on track. There were two races over the weekend with James Cook finishing 6th in his best of the weekend and Ryan Hitchcock was 10th. Josh Hiatt returned from injury and successfully completed both races. 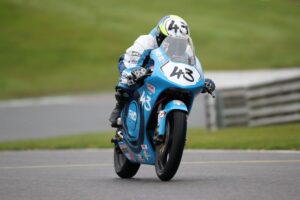 All the British Talent Cup riders were sent out on wet tyres for qualifying. There had been rain overnight and the cold temperature of the morning had left the track damp. This was the first time for Hitchcock and Cook on the 2.7 mile GP circuit. It was the returning Josh Hiatt who qualified best of the trio. He lined up 14th on the grid for the first race. James Cook was two places further back in 16th and Ryan Hitchcock posted the 19th best time.

Unfortunately for Hiatt his neck issues returned almost immediately the race got underway and he began to slip backwards going on to finish in 19th position at the end of the 14 laps.

James Cook launched himself from the start line. He gained five positions on the opening lap moving into 11th early on. Although he dropped a position the following lap he was in the battle for a top ten finish throughout. Cook finished the race in a group of eight riders competing for 8th place. He crossed the line 9th at the flag after a great race. 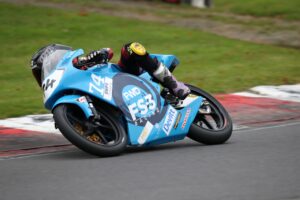 Ryan Hitchcock, who recently turned 13-years-old, dropped a position early on. By the middle of the race Hitchcock was circulating in 16th position as the group of riders he was in latched on to the group ahead which included his teammate James Cook. He set his fastest lap time of the weekend so far, a 1:41.049 on the way to 15th and another point scoring finish.

James Cook made another good get-away from the line moving up three places in the opening lap. By the end of lap three had had gained a further two positions and was 11th. He continued to progress moving into tenth spot a lap later as he led a group of seven riders. Cook then broke from the group and looked to close a gap of over two second on the rider ahead. He went on to cross the line in an impressive sixth place, the fourth time he has managed the position in his rookie season.

Ryan Hitchcock also made a solid start gaining one place on the opening lap. He then slipped back behind his team mate Cook on the third lap into 12th place. The group wa 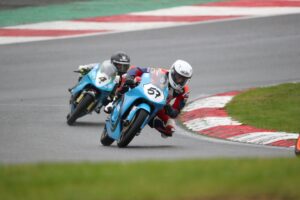 s tightly packed and places changed regularly. Hitchcock fought he way to ninth place at one stage, fell back to eleventh and finally crossed the line in an exciting battle in tenth place.

Unfortunately, for Josh Hiatt his return to track action was marred by a continued neck problem he has suffered all season. Despite skipping two rounds and receiving treatment to try and improve the situation it has had little effect. Even with a significant amount of discomfort he was determined to finish the race and took the chequered flag in 18th.

Gary Wilson said,” I am delighted with how the season has gone this year. We had two Moto3 rookies in the team and they have scored points at every race meeting including several top ten finishes. This makes me really positive about the 2021 season. Unfortunately, Josh has suffered all year with a neck problem and this had hindered his performances. Hopefully he can now get some proper rest and get himself fit for the 2021 season.”