Skip to content
23/08/2022 By Gary Wilson Comment Closed
Race report Thruxton round 7 British Talent Cup.
Its been a very hot weekend for the Wilson Racing boys down at Thruxton with lots of high temperatures leading to lots of action packed racing.
The weekend started on Friday with FP1 being held early in the morning meaning it wasn’t too hot for the riders as they reminded themselves of the track, as when they were here last year it was torrential rain leading to race 2 being called off. After FP1 the boys were happy with finding their way around the track with Harrison coming in 11th with a time of 1.24.792, and Sullivan coming in 15th with a time of 1.25.050. 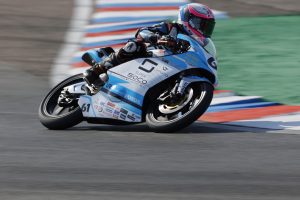 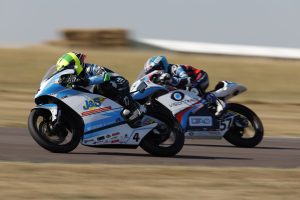 Race 1 was in the afternoon of Saturday with both boys being moved up a place on the grid due to a rider injury. Harrison started on 14th and Sullivan on 15th. It was a close race in race 1 with both riders battling it out in the third group of riders. Harrison and Sullivan both worked well together in the race with Harrison crossing the line in 10th and Sullivan in 9th.
Finally it was Sunday morning and time for warm up. Both riders came back in from warm up happy and ready to race that afternoon. 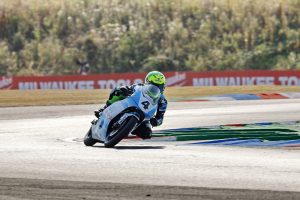 At 2:55pm it was time to race with Harrison lining up 13th on the grid and Sullivan on 9th. It was a shortened grid start due to the warm weather so after only 5 minutes on the grid it was time for lights out. Both riders rode great in the second race and managed to form a group of about 5 riders battling it out for a top 10 finish, however the race got red flagged with 2 laps to go due to an incident meaning Harrison finished in 9th and Sullivan finished in 12th.
After a very hot Thruxton we now have a few weeks off before round 8 at Snetterton on the 9th-11th September so time to rest, re-energise and get ready to race again. 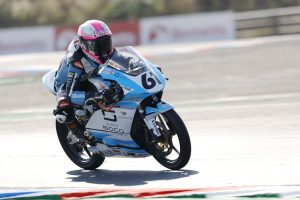