Wilson Racing rookie, Luca Hopkins made a positive finish to the British Talent Cup MotoGP weekend at Silverstone with a 13th place in race two. James Cook showed podium pace throughout the two races but failed to finish both after being brought down but through no fault of his own. 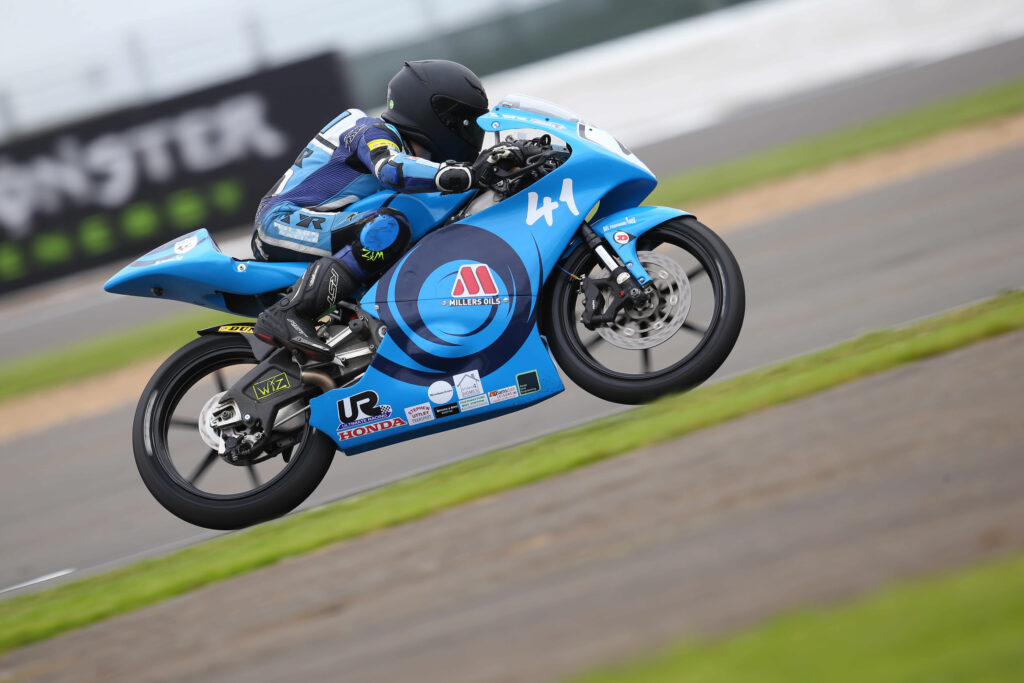 The number 43 of James Cook put together a solid start to the weekend after qualifying in tenth position on Friday afternoon. Luca Hopkins also made fine progress on day one. Having been 29th at the end of free practice one he went on to end the day qualifying seven places higher in 22nd.

The British Talent Cup riders had to wait until 16:30 for their next track action on the Saturday. With huge anticipation the thirty plus riders lined up on the grid at the long 5.9 kilometre Silverstone circuit.

Lights out and the longest laps of the BTC calendar began. Cook was quickly up from tenth to eighth in the opening two laps whilst Hopkins made short work of improving his track position to 20th.

Hopkins made good progress as he pushed on hard achieving 16th by the end of the third lap. Unfortunately, he lost the front end at Luffield a lap later which saw his race end early as he crashed out.

At the front of the race four riders looked to make an early break-away as James Cook continued his improvement in track position as he slipped into seventhth position on lap four. A lap later and the leading group consisted of two riders and Cook was in the thick of the battle between seven riders for third place down to ninth.

James Cook’s was soon to be on the receiving end of his first misfortune of the weekend. As the seven riders approached Vale corner one of them fell. Although Cook could see what was happening in front of him and backed off he had nowhere to go. The number 34 collided with the fallen rider’s bike which sent him and his Moto3 machine to ground and out of the race. The battle for the podium was over. 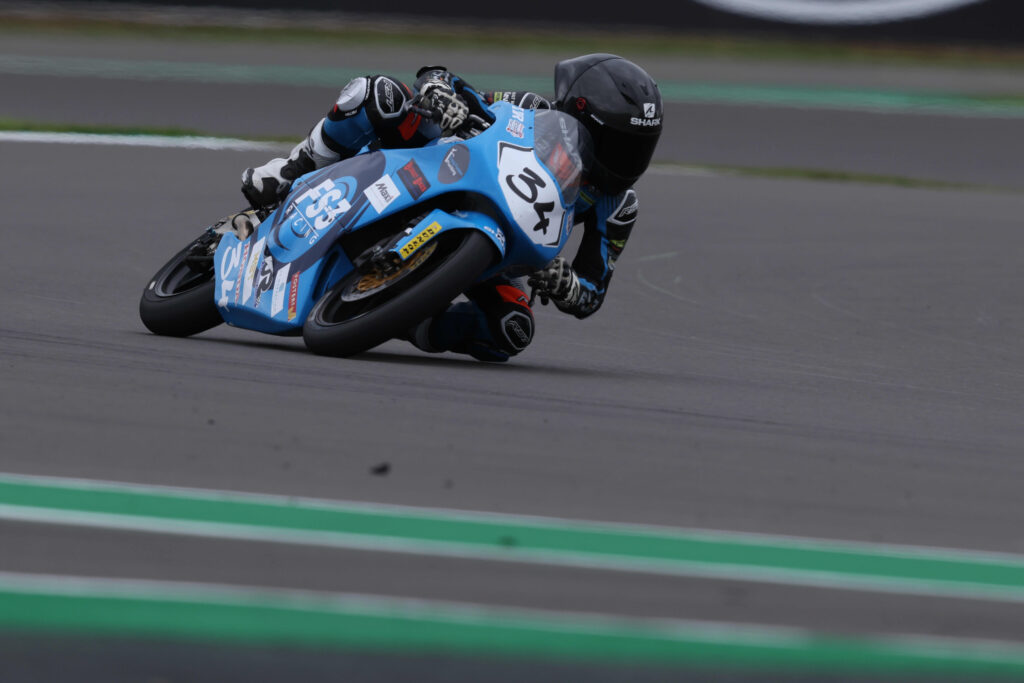 After a good lap time from race one Cook would line up 6th for the second race and Hopkins would start 22nd.

Cook didn’t make the best of starts dropping to tenth but quickly made up a place in the following few corners.

In the ensuing laps Cook was one of seven riders in the leading group, patiently waiting for the right opportunity to make his way through the pack.

Again the leading two managed to gap the remainder and led the chasing riders by a couple of seconds by the end of lap eight. During these laps Cook had carefully worked himself in to fifth spot. With three laps remaining he hade ridden superbly and was up to third position. He was leading a group of six riders looking for a place on the last step of the podium.

It was not to be Cook’s weekend, however. Another rider came up the inside of him as they approached Abbey and temporarily lost control. He had to sit the bike up momentarily which meant he changed line and Cook clipped his machine and went down for the second time in the weekend through no fault of his own and with just three laps remaining.

Hopkins made a flying start from 22nd on the grid to 17th in the opening couple of laps. The number 41 of Wilson Racing was having a great race. After his blistering start he set his fastest lap of the weekend by far on lap five, a 2:23.998.

Luca Hopkins continued in 17th position until the final few laps of the race. In the closing stages he was just under a couple of seconds behind a group of four riders ahead and closing whilt comfortably five seconds ahead of his rivals behind. He cut that gap significantly in the final stages but ran out of laps. 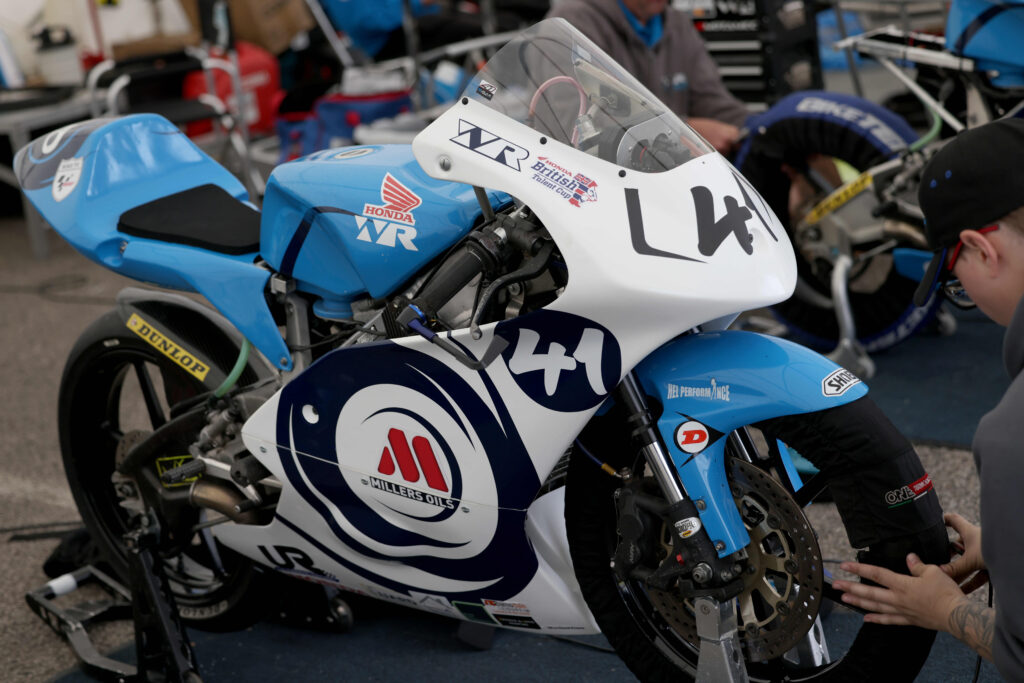 At the flag Hopkins was in 13th position adding three more championship points to his tally at the Iconic Silverstone track.

Gary Wilson said, “Congratulations to Luca Hopkins on three more championship points. He responded well after coming off in race one and I was delighted for him on Sunday. What can I say about James Cook? The lad did everything right but just found himself in the wrong place at the wrong time. Two racing incidents and he was the innocent victim on both occasions. The positive thing is we know he has got the pace to be in the leading group. He has already shown us that this year and again this weekend.”

The next British Talent Cup event is at Snetterton from 3rd to 5th September. 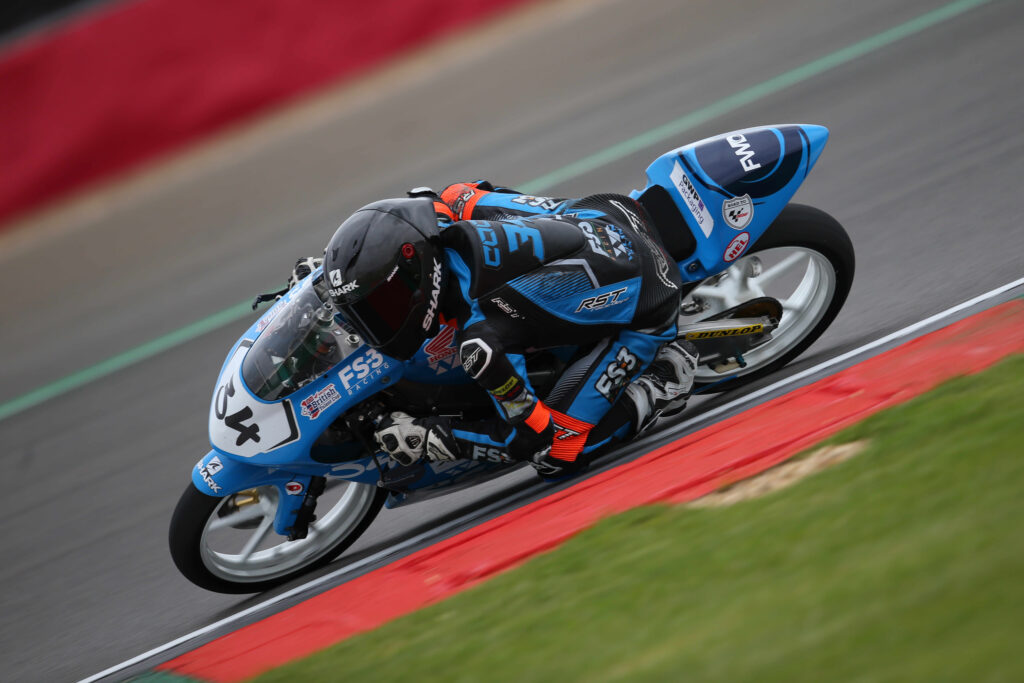