The was double podium delight as James Cook took two 3rd place finishes from the three races at Donington Park National Circuit in the British Talent Cup. A DNF in race three was the only small blot on the copybook from an otherwise outstanding performance. Rookie Luca Hopkins narrowly missed out on adding to his championship points tally with two 16th and a 17th place finish. 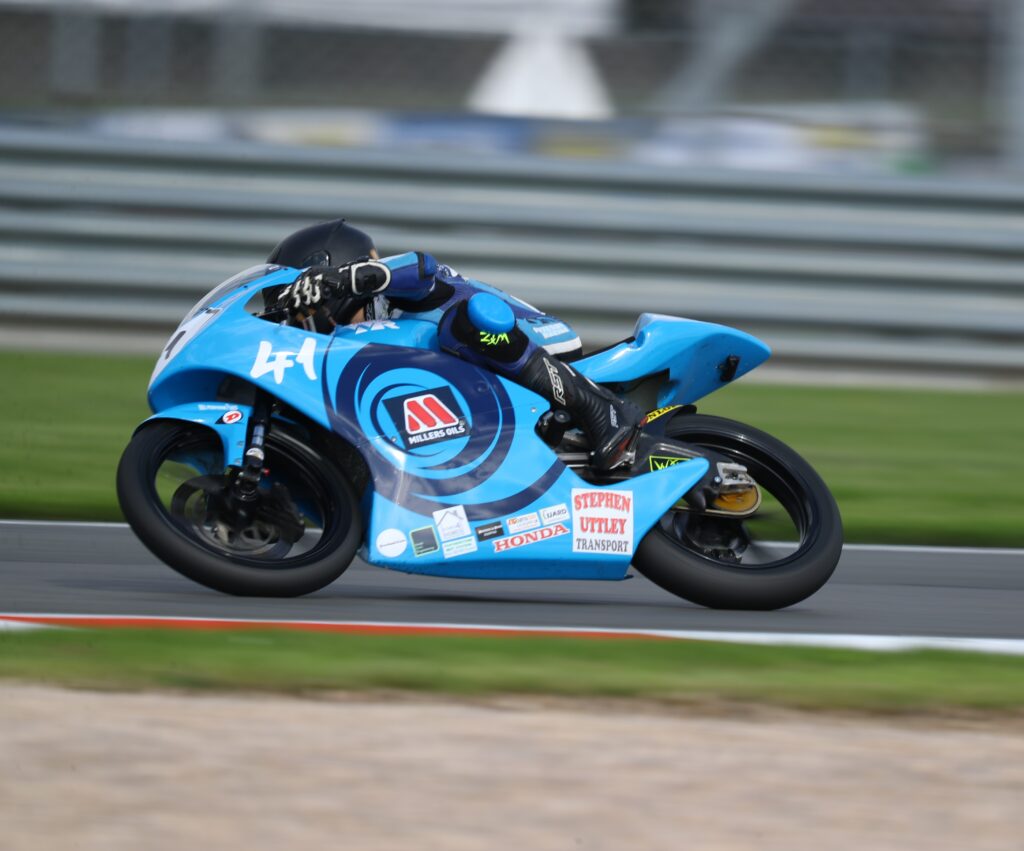 Free practice
Wilson Racing was reduced to two team members this round as the unfortunate Ryan Hitchcock had not recovered sufficiently from a broken left wrist suffered at the last round at Thruxton.
James Cook was quickly up to speed in the two free practice sessions on Friday. He was inside the top five during free practice one before reducing his lap time by a further half-a-second in free practice two to finish the day third fastest overall.
The number 41 of Luca Hopkins had an eventful Friday. In the first free practice he suffered a small crash and then in free practice two he was hit by another rider damaging the rear of his moto3 machine. Like Cook, he managed to improve between the two sessions to finish Friday in 23rd overall.

Qualifying
Qualifying was on Saturday morning under an overcast sky at Donington Park. Both riders continued their improvement with James Cook clocking a 1:15.580 which saw him miss out on pole position by just 0.075 seconds.
Luca Hopkins continued with his significant improvement in pace as he qualified in 22nd position with a lap time more than two seconds quicker than FP1 on Friday. 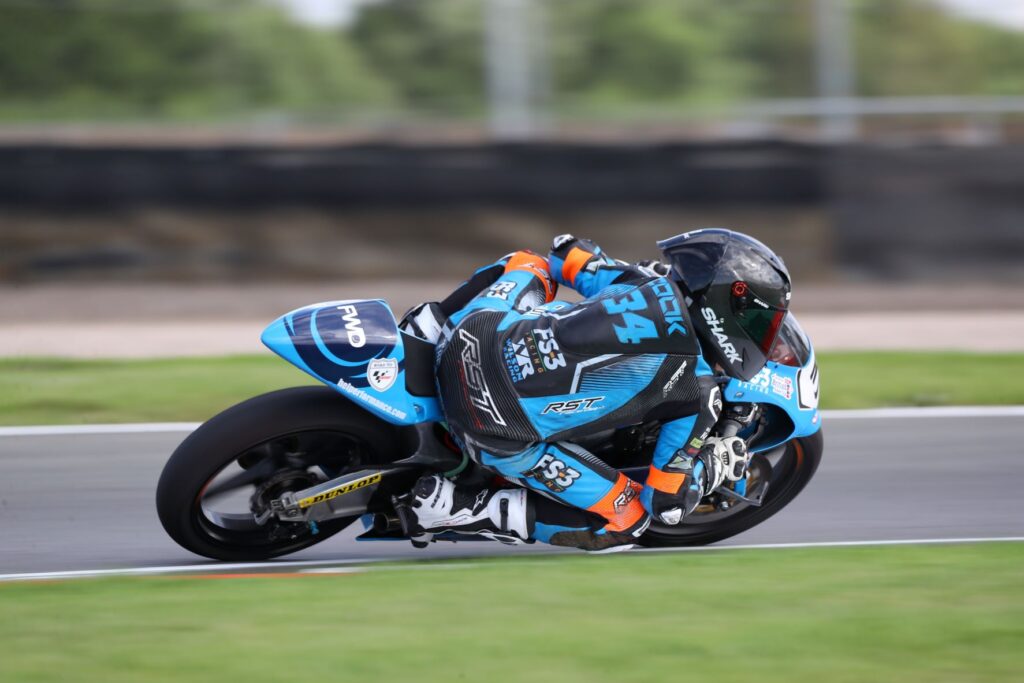 Race One
Although the sky was a blanket of grey and rain threatened it did nothing to diminish the enthusiasm of the young Moto3 riders who produced a thrilling spectacle on the Donington National Circuit.

Cook swept into the first corner on lap one in third position as he set about looking for his third podium of the season. By the fourth lap Cook was third in a lead group of five riders who had broken away from the rest of the field.

Cook dropped to the back of the leading group and appeared to have lost his opportunity for a podium finish as the race progressed. That is until he set his fastest lap of the race on lap nine and worked his way cleanly through some backmarkers. He then went from fourth to 2nd as he got back to the race leaders entering into the chicane in the closing laps. The Moto3 machines were three abreast through Hollywood and then onto Craner Curves as they battled for the podium places. Ultimately Cook finished in a superb third position for another podium finish.

Luca Hopkins also enjoyed a positive race. Having started 22nd on the grid he quickly improved as he rose to 19th position in the first few laps. On lap 7, Hopkins made up another position passing Pendrill for 17th before going on to cross the line 16th missing out on the final point by 1.8 seconds.
As the riders made their way to Parc ferme the rain began to fall. 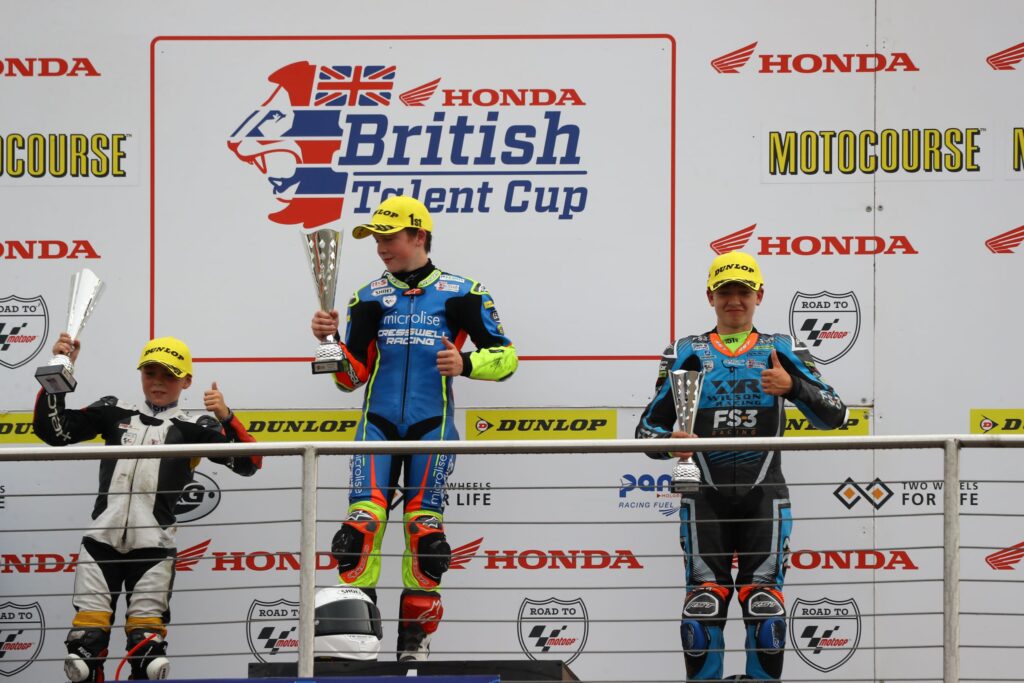 Race Two
James Cook would start from fifth place for race two and Luca Hopkins lined up 22nd again. Race two proved to be as exciting as race one as we saw seven riders battle for the podium places. There were a number of time penalties handed out and the end of the race as the young riders grappled to stay within track limits during a tough but exciting encounter.
James Cook made another good start to a race turning into the first corner in fifth place but already up to third by the end of the first lap. But by the end of lap two he was down to seventh, so close were the field. He regained a position moving into sixth using what has become his trademark move at the chicane on lap four. Two laps later and Cook set his fastest lap of the race so far as he took over fifth spot in the race.

Cook’s race position rose and fell as he and his fellow Moto3 riders used slipstream and late braking passing each other several times on each lap. By lap 10 he was running fourth but he was down in eighth by lap 15. It looked like he was going to struggle to get back to the front of the group but it only took him two laps to reach third position. Although he finally crossed the line in fifth spot two riders had incurred time penalties for cutting the course and Cook deservedly collected his second podium of the weekend.

Luca Hopkins had fluctuating fortunes in the early laps as he climbed a place but fell back shortly afterwards. However, on lap six he made real progress and moved into 16th position taking advantage of four riders in the process. At the flag, Hopkins crossed the finish line in a creditable 17th place but just missing out on points again. 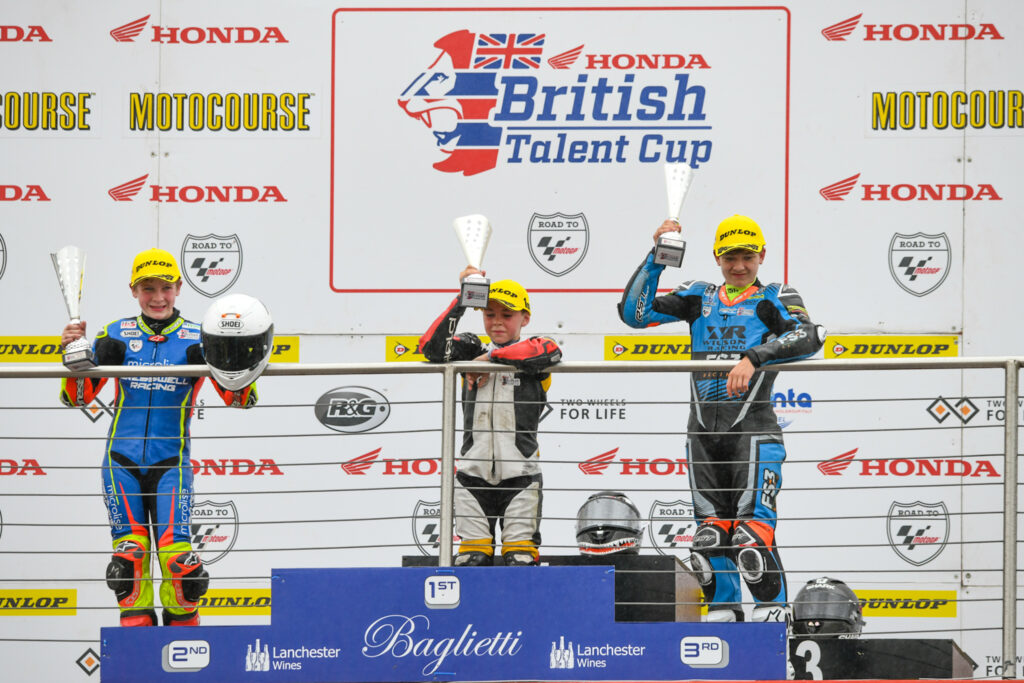 Race Three
Cook started second on the grid and Hopkins 21st for the final 22-lap race of the weekend. This time the leading group consisted of ten riders. Again with positions constantly changed. Initially Cook was running in and around second place. He briefly led on lap three as they turned into Redgate corner and again on lap five and ten he headed the race.

In the final third of the race, he dropped back to ninth before recovering a position as the riders encountered some backmarkers. With just two laps remaining the back stepped out at Redgate and Cook ran off into the gravel and eventually tipping off uninjured.

Luca Hopkins continued his progress in the moto3 class. The number 41 made up three positions in the first three laps. He made his way through to 16th place battling with Banham and Johnson. Hopkins crossed the line to finish 16th and this time missed the points scoring positions by just 0.274 seconds. 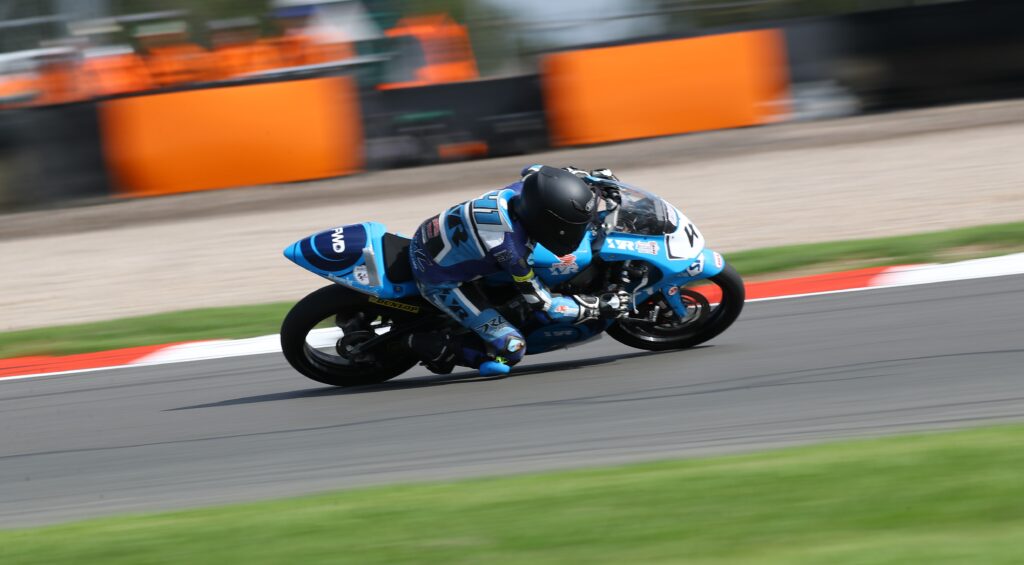 Gary Wilson said,” James Cook rode brilliantly all weekend and was amazing on the brakes into the Roberts chicane where he made the majority of his overtaking moves. I am delighted he got two podium finishes. Luca Hopkins was unlucky not to score any points but this year is all about learning the big circuits for our rookie and in all honesty he wasn’t far off adding to his total. It was nice that our injured rider Ryan Hitchcock joined us to cheer on his teammates and we hope it won’t be too long before we see him back out on track.”

The next British Talent Cup event is at Silverstone from 27th to 29th August.